Micro Machines World Series is a nostalgia filled racer that fans should enjoy, at least for a little while. One of the big complaints that I have with Micro Machines World Series is the lack of content in this game. There are four modes available in the game with only two of them generally being available in the beginning. There is a “special event” mode that might be available to you when you first start this game but it is a timed event so you never know. The other mode is Ranked Match which won’t unlock for you until you reach level 10. I don’t really have a problem with this as it forces people to play the game for a little bit and gain an understanding of how everything works before jumping in the deep end, so to speak. Once that is unlocked then you will “Quick Play,” “Ranked Match” and “Skirmish” available to you at any time.

Quick Play is as you would expect. If you select that option you can choose from a standard race, battle mode or elimination. If you select race you will get put on a random track and you simply have to cross the finish line before everyone else. The annoying thing about this mode is that you can’t select which track you are going to race on. You are also going to need a little bit of patience as you will probably get destroyed in the beginning until you learn the layout of each track. Of course that can be harder to do when you can’t pick the track you want so your practice time is going to be limited. If you choose to go the Battle Mode route that is basically your team fighting against the opposition to try and get a higher score. The two games that I seemed to get a lot were Capture the Flag and Bomb Drop. In Capture the Flag you have to capture the enemy flag and then bring it back to your base but you can only score if your flag is safely in your base. In Bomb Drop there is a bomb that you have to fight over and the objective is to place it in the enemy base and then detonate the bomb. In both games the highest score wins. If you choose to go the Elimination mode route that is essentially a race to the finish line with the last man standing. When you begin this race you will be trying to eliminate your opposition. The last man standing you will get some points and then you’ll do that again and again. At the end of each round your line on a graph gets closer to the finish line. Whomever gets to the finish line first wins.

The next selection once you get to a high enough level is the Ranked Match. This is where you can race online against others to see how good (or bad) you really are at the game. Getting into a game took longer than I liked but once I was able to get in there I had a great game and everything seemed to work perfectly. That is one big issue though no matter what mode you are picking, the time it takes to get into a race. It would take on average 60 seconds for the game to find a game for me and then put me in it. After a little while that got a bit frustrating. Finally there is the Skirmish mode for some local multiplayer fun. You can choose from a simple race here, elimination or a free-for-all. The nice thing here is that you can actually pick the track you will race on and a couple of different options. It would have been nice if that was available in the other modes too.

There are 12 cars to choose from in Micro Machines World Series and they are all available in the beginning. There are cars like a monster truck, ambulance, fire truck, police car, a tank and more. Each car has different abilities. One of my favorite cars to use was the police car with its primary weapon being a standard shotgun that could definitely cause some damage. To me the police car was a little less floaty to drive as well. That was a big problem with a couple of the vehicles I tried out so once I found a car I liked I pretty much stuck with it. There are also abilities that you can build up to as you dominate on the race track. The All Points Bulletin ultimate ability was a lot of fun as that gave me a helicopter that would fly over me with a spotlight and any time I would get close an enemy the helicopter would wipe them out quickly. Fun little moments like that are what kept me playing Micro Machines World Series. 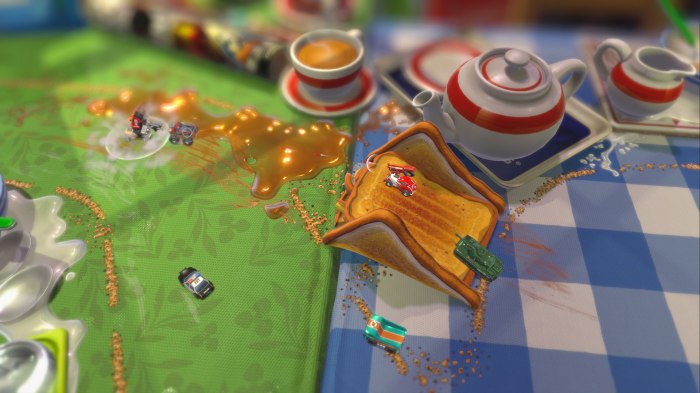 As you level up in Micro Machines World Series you will earn loot boxes. There are a wide variety of things that you can earn here from a new symbol, a new paint job for your vehicle, a new title that you can use on your profile and more. Once you open a loot box and see what you have you can equip right then and there or simply choose to do that at a later time. You also have your ranking that you can look at so you can see how you stack up in ranked play as well as your player bio that will give you stats such as time played, what division you are in, the XP you have earned and other statistics.

Overall Micro Machines World Series offers up a lot of nostalgia but the game could be better. It is a bit a shallow and could definitely use some more content. Hopefully a future update will tweak it and bring in some of the ideas I had up above. That would give the game a bit more replayability. With all of that said though if you have a great group of friends that you play games with you should have a blast with Micro Machines World Series. The action can get incredibly chaotic and fun when it is against your friends. If you are going the solo route though you will probably get bored pretty quickly. Micro Machines World Series is a decent game that attempts to cash in on the nostalgia you have for the brand but could have been so much more.