State of Decay: Year-One Survival Edition is coming out in a couple of months and Gaming Target was invited to check out how the game is coming along for Xbox One. For those who might not be familiar with State of Decay, it is essentially the ultimate zombie survival game. There is an open world to explore that is full of both danger and opportunity. The world will respond to your decisions so you need to make them carefully. You’ll have to recruit a community of playable survivors, each with their own strengths and talents. If you want to survive you will have to design and fortify a base of operations and that is just the tip of the iceberg to what you will have to do to survive and last one more day in State of Decay.

State of Decay: Year-One Survival Edition is the original game from Xbox 360 remastered in 1080p. There is improved lighting, textures and shadows that show off Trumbull Valley and Danforth like never before. The animations and combat mechanics have also received an overhaul to try and make things even more intense. Additionally, the “Breakdown” and “Lifeline” add-ons will be included in the Year-One Survival Edition giving you a tremendous amount of content. Some other changes to the Xbox One version of State of Decay include new achievements with 1,500 gamerscore to earn. There will be community challenges and rewards as well as individual rewards. There is also the Xbox Game DVR feature where you can record and share your triumphs or your defeat with your friends over Xbox Live. 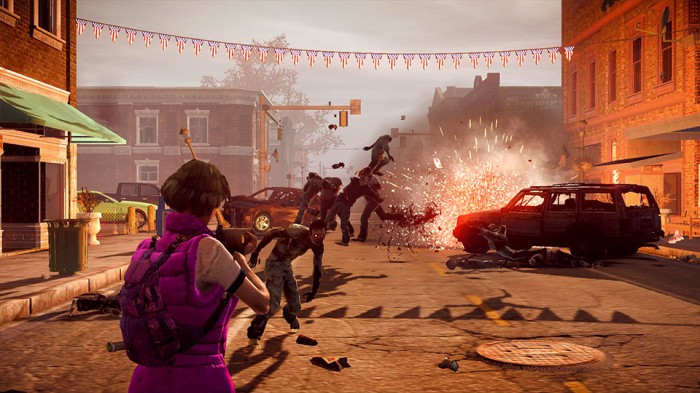 This new edition for Xbox One also brings with it a new mission type. Mysterious crates have begun dropping into remote areas on the map and, of course, they are attracting hordes of zombies. You will need to wipe out that infestation and claim some of the rarest and most powerful equipment ever seen in a State of Decay game. There are new vehicles as well, including a new SUV that will have high durability. There are also over 25 new vehicle skins distributed across all of the maps. In addition to all of this you can also unlock your favorite characters from “Lifeline” and use them in “Breakdown” with a new set of Challenges. This new version of State of Decay also features new under-barrel attachments for some weapons as well as incendiary ammo. The facility actions from “Lifeline” will also now show up in every version of the game, including ammo-refilling and snack-making at your base. NPC Enclaves have also received a makeover, making it easier to trade and build trust with them.

Gamers who own the Xbox 360 version of State of Decay will also be happy to hear about the upgrade program that will be in place. State of Decay: Year-One Survival Edition on Xbox One will cost $29.99, however, if you own the Xbox 360 version you will receive 33% off that price and be able to get it for only $19.99. Keep in mind though that this special will only last until June 30, 2015 so be sure to take advantage of it while you can. To qualify for this special price you will have needed to purchase the base game, “State of Decay” and have the same active Xbox Live account when “State of Decay: Year-One Survival Edition” becomes available.

During my playtime with State of Decay: Year-One Survival Edition I was impressed with how well it ran as well as how good it looked. The improved lighting and everything else make things “pop” a bit more and everything just looked a little better. There is a tremendous amount of content here and really is the “ultimate” version of State of Decay. It controlled really well and I was quickly introduced to the perma-death concept in the game when one of my characters was killed and then I heard conversations from others about how they missed her. Your actions do have consequences in the game so you need to tread lightly, especially if there is a zombie hoard nearby. Overall I am optimistic at what I saw for State of Decay: Year-One Survival Edition and I look forward to being able to sit down with the final product in a couple of months and seeing what it has to offer. My experience with this early preview build was a lot of fun and I’m not expecting anything less from the final product.