The Gears of War saga is one of Microsoft’s biggest franchises and they are all really well made games. Whenever a new one comes out it is a big deal. Following up on the superb Gears of War 3 that was released in 2011, Gears of War Judgment takes a step back and shows you some of the events that transpired before you met up with Marcus and Dom. The main character in Gears of War Judgment is Baird along with Cole Train, Paduk and Sofia. Everyone should be familiar with the first two names on that list while Paduk and Sofia are newcomers to the Gears experience. Sometime before the events that take place in Judgment, Paduk was actually fighting against the COG and ended up on the losing side of that battle. He hasn’t forgotten what happened to him but he works with everyone to try and eliminate a common enemy in the Locust. Sofia is the young one in the bunch being only a cadet and her attitude is slightly disobedient but she’ll do what needs to be done to insure the Gear’s victory. As you progress through the story you will get a chance to play as all four of these characters and find out what happened prior to the events in the original Gears of War.

The story of Gears of War Judgment is told from the viewpoint of the COGs in your group. You’ll play the first chapter as Baird, the second chapter as Cole Train and, well, you get the idea. The campaign is standard length for third person shooters with me being able to go through a chapter in approximately an hour or so. Of course that will depend on the difficulty and if you choose to go through the game on Insane (unlocked after you beat the campaign the first time) which will most likely take you significantly longer to get through the story. The overarching theme as you go through the campaign is about the COGs being on the front lines of the war that is going on and how there are times when they have to disrespect authority and do what they know is right, not what they were ordered to do. The story starts out in present day and then flashes back so that you can experience the events that led up to your current situation. As you progress through the story you will notice that there are “declassified” missions available to you. The story behind these objectives is that the events in the “declassified” missions are what actually happened and not what is “officially” on the record. These usually range from the Locust being a lot harder to fight in the next room, to only being able to clear out the enemy with a certain type of weapon and various other objectives that adds another layer of challenge to what you are going through. These are completely optional to do and was a great idea by the development team.

I’m being purposefully vague here so as not to ruin any of the story. With that being said though the story in Gears of War Judgment is definitely the weakest in the series. I’m not saying it is a bad story, quite the contrary. It is a story that I enjoyed playing through but it can’t stack up to the original trilogy, in my opinion. The first Gears of War introduced us to the Locust and we were trying to get a handle on everything that was taking place. The second Gears continued with us trying to eradicate the Locust by inflicting heavy losses on ourselves. It was kind of a lose-to-win type of deal. This is also where we began to learn more about the Locust, the Locust queen and Marcus’s father. The third Gears of War tied everything together giving us answers that we had been search since the first title and throwing in some twists along the way. The fates of different characters were decided and one in particular had a pretty big emotional impact. I really didn’t get that type of payoff with the story in Judgment. One could argue that with Gears of War Judgment being a prequel that it couldn’t really fall back on the established story in the original trilogy but I don’t know if that would be entirely accurate. When the original Gears of War starts we find Marcus locked up in prison. I would have loved to have seen the events that lead to that result and then have Gears of War Judgment end right before the original begins. That way they still could have incorporated Dom, Baird and Cole as well. For me that seems like it would have been a better way to go.

After you get through the story there are a bunch of multiplayer modes for you to experience and this is most likely where people will spend a good amount of their time with this game. First there is Survival mode where you fight wave after wave of the Locust Horde with up to four friends. Each session is ten rounds along and each wave gets progressively harder until you reach the climax (and hopefully surive) in Wave 10. This is basically like a mini Horde mode but surprisingly Horde mode itself is nowhere to be seen. It is a very strange decision on the part of the development team over at People Can Fly not to incorporate one of the more popular modes in the Gears franchise. It really doesn’t make any sense. There are of course versus modes with Overrun, Free for All, Domination and Team Deathmatch. In Team Deathmatch it is you and your teammates versus the other team and the team that gets the higest score wins. In Domination there are three rings to control and you earn points by controlling these rings. In free-for-all you have to fend for yourself as it is you versus the world. The person with the highest score at the end of the round is the victor.

Overrun is by the far the most interesting mode (at least to me) and it is the mode where I had the most fun. It is a bit like Survival mode only one team controls the humans and one team controls the Locust. If, for example, you are on the human team then you will start out the game by trying to defend three checkpoints. If the Locust manages to destroy all three locations then they win the round. After that round is over the roles switch and now you will become the Locust and try to destroy the checkpoints while the other team is now trying to defend them. As the Locust you will start off with access to four different classes with the Ticker, Wretch, Grenadier and Kantus. As you progress and get more points you will open up more powerful classes with the Rager, Serapede, Mauler and Corpser. Being able to play with these characters will give your team a great advantage as they can be really difficult to bring down, especially the Corpser. Strategy plays a really big part in this mode and the team that wins is generally the one that works together the best. As you go through the different maps there will be roadblocks that some of these characters can’t get through. The way you solve that problem is to have someone who is playing a Ticker go over there and destroy said roadblocks. In the games that I played there were a few instances where I could eliminate a roadblock for a teammate and then he would charge ahead and score a lot of points for the team. The team that works together and finds a way to utilize the strengths of each individual will be the winner of the game more often than not even if just one person is playing as a Ticker and his sole job is to run around the map and offer support to the other players. If you are playing on the human side you will have four different classes to choose from. Those classes are the Engineer, Soldier, Scout and Medic. Once again strategy is going to play a key factor into how successful your team will be. The engineer has the Gnasher weapon for offense but his other weapon is actually a repair tool. When you have a Ticker trying to destroy one of those roadblocks you (or one of your teammates) needs to quickly eliminate it and then the Engineer can repair the roadblock. The longer you can keep the roadblock up the better your team will do. Keep in mind though that once the roadblock is destroyed you can’t rebuild it. Soldier is your classic class and comes with the Booshka weapon as well as the standard Lancer chainsaw. The Scout comes with a sniper rifle and a pistol while the Medic has the standard Lancer and a sawed-off shotgun. Each map has different tricks that you can learn and the team that can utilize the different features of each map while working together will come out ahead most of the time. Overrun is by far the most fun I had within the whole multiplayer suite and I can see it being the most popular mode for a lot of people.

Mechanically anyone who has played the previous Gears games will feel right at home here. As soon as I started the campaign I knew exactly how to play and I immediately felt comfortable with what I was doing. If you are new to the series it shouldn’t take you too long to get up to speed with the different things you can do in combat. Gears of War Judgment is a very pretty game and it has some spectacular looking vistas. There were times when I would simply pan around the environment to look around and see what was going on around me. The audio was done really well and will be instantly recognizable to Gears veterans. It can still be really satisfying to hear your chainsaw rev up and then stick it in the back of a Locust soldier. Gears of War Judgment did feel a bit easier than the previous entries in the series but that might have been just me. With this being the fourth title in the franchise I think I just know how to play it really well, at least in the campaign. 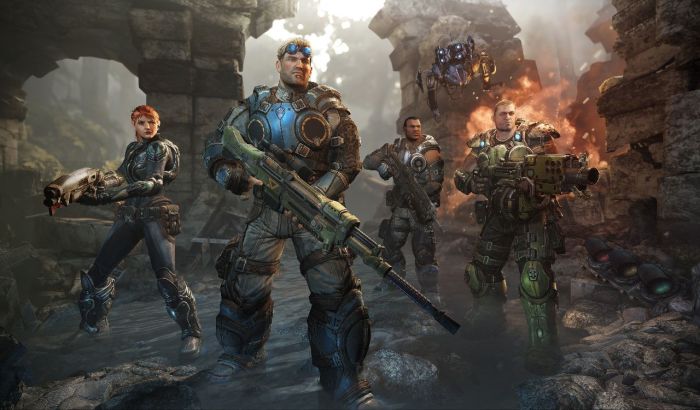 Gears of War Judgment is a really solid entry into the Gears of War franchise. Despite my opinion that the story is the weakest in the series it isn’t bad by any stretch of the imagination. I had a lot of fun going through it and I will probably go through it multiple times with different friends. Being able to go through the campaign with three friends is a tremendous amount of fun and only adds to the already fun experience. Multiplayer is a lot of fun too with Overrun clearly being the star for me. The other modes are fun as well but for some reason Overrun really struck a chord with me. If you are a fan of the Gears of War series I highly recommend that you try out this game. It has a lot of great moments and after you beat the main campaign there is something extra for you to play as well.