Shaun White Skateboarding is Ubisoft’s entry into the skateboarding genre that was once dominated by Activision, however, in recent years, EA has come along and claimed the crown with the Skate franchise. In Shaun White Skateboarding you have to deal with the Ministry who is all about conformity. The world is a really dull blue and gray world and everyone wears the same exact uniform. There is propaganda everywhere urging people to not stand out and to simply conform to what the Ministry does or says. For people who refuse to conform they are sent to a special center where they are brainwashed into, essentially, doing the Ministry’s bidding. Shaun White is one such rogue, however, he has been captured and it is now your job to save the city from a boring existence at the hands of the Ministry.

The way to save society in this game is to introduce some color which will allow everyone to express their creativity. The way that you do this is by performing tricks on your skateboard. If you are skating down a street and then jump on and grind a pole you will see that small part of the world explode in color and any Ministry members susceptible will be “released” and able to think for themselves again. As you are skating around the environment you need to create Flow which is accomplished by performing tricks on your skateboard. Once you get your Flow up to a certain level you can begin to transform the environment. A couple of examples of this is creating small ramps in the middle of a street or eliminating Ministry propaganda to replace it with an ad for Stride gum. There’s definitely product placement in this game as you will quickly find out the first time you see a Wendy’s pop up and you see ads all over the place for a frosty. 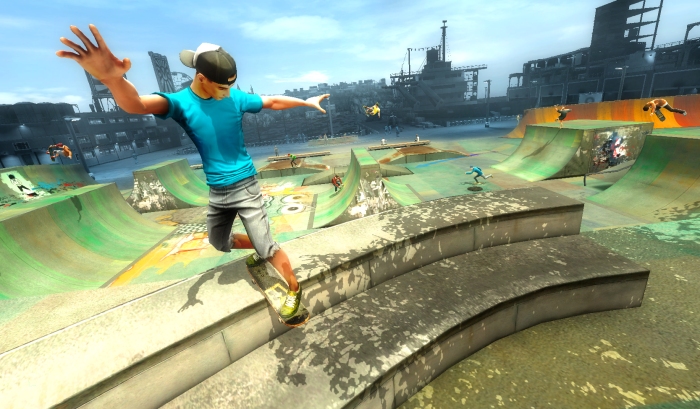 There is one pretty cool aspect in Shaun White Skateboarding and that is shaping. As you skate around the environment you will see these green rails with an arrow pointing in a specific direction. Jump on one heading in the appropriate direction and you get control over where the rail goes. This all sounds pretty good but you aren’t given the amount of freedom that you would think with a feature like this. There is a pre-determined end point where they would like you to direct the rail, however, you don’t have to point the rail in that direction if you don’t want to. You don’t have an unlimited amount of rail though and you run out pretty quickly so you better decide where you are going to place it or you will have a rail that goes nowhere. Fortuntaely you can reset the rail placement at any time and try again but the whole mechanic is marred by a lack of freedom and the clunky controls that accompany it.

For a game that is called Shaun White Skateboarding, Shaun White plays a very small role. Fans of Shaun’s will be really disappointed that Shaun isn’t involved throughout the majority of the storyline. Ubisoft could just as easily have called this game “Ubisoft Skate” and saved themselves the money on the Shaun White license since they opted to not really use him. One would assume that if someone is picking up a title called Shaun White Skateboarding that they might want to actually play as Shaun White, however, perhaps that is just my logical thinking getting in the way here. The game is aimed at trying to get both skating fans as well as newcomers and has come up with a pretty simple control scheme. You can pull off tricks on your skateboard by simply flicking the right analog stick or, if you are really daring, you can hold down an additional button so that your created skater will do more advance tricks.

The problem with Shaun White Skateboarding is that even though it has some cool concepts none of it is implemented really well. The campaign is a bit of a mess and while I was having a lot of fun at first bringing color back to the world it does eventually get old. Then, later on in the game, you are forced to do ridiculous tasks such as removing pigeons off of a roller coaster or taking some zeppelins that are flying overhead. For some reason they even put you under a time limit for some of these tasks which makes a mundane task even more annoying. It gets to the point where it is just not fun anymore and that is a real shame from a title that I was initially having a lot of fun with.

Bringing color and life back to the world through skateboarding is an interesting concept even if it doesn’t make a whole lot of sense. There is a multiplayer component here but it isn’t really anything to get excited about and I wasn’t able to connect to a whole lot of games. There was one really cool segment during the campaign where a helicopter was chasing me and I had to escape, however, that was only one small part. It seems like the farther you get in the story the more mundane task you get asked to do. It really is quite baffling and I’m wondering if the development was under a time crunch and had to cut out things that were initially planned or if this is the game they really wanted to make. There was a chance to do something really cool here and the development team dropped the ball. The game certainly isn’t broken and people who enjoy skateboarding titles will probably fight through the tedious tasks to try and save Shaun White. Everyone else should definitely rent this game before they buy so that they know what they are getting themselves into.